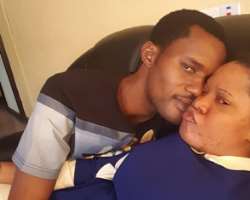 Toyin Aimakhu's ex-lover, Seun Egbegbe, may have lost an expensive car and also his lover, Toyin, who took his love for granted, but he still has various cause to glorify God.

The popular Lagos big boy, some months back, while dating the actress, lost his Honda Crosstour and was only left with his Range Rover Sport, which was what his lover Toyin, was cruising around town with while he moves with cab.

But smiles have returned to his face again as he transferred some millions of naira into the account of a car dealer just to acquire a convertible ride. Expressing his happiness, he said, “New week new blessing thank you lord.”

While dating Toyin, Seun had revealed recently that after his Honda car was stolen, he had to leave his Range Rover Sport for the actress to use while he pays cab driver N10,000 just to move around each day.