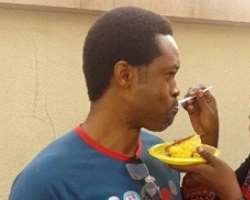 Nollywood actress, Omoni Oboli, has been enjoying her marriage which has span several years and each time she stares at her husband, she smiles because he is just her perfect gentle man.

The actress has revealed that her husband is very handsome and has lots of good characteristics but come April 8, 2016, he will not escape the strike that will happen in the home.

Omoni made this threat to her husband as the countdown begins to the much talked about movie, 'Wives on Strike' which is due to hit the cinemas in April 8, 2016.

She has described the movie as one which will leave many to ponder while showcasing the power of a woman at home.

In her words, “I know you are drop dead handsome and all Nnamdi Oboli, but that's not exempting you from the strike come April 8th.”