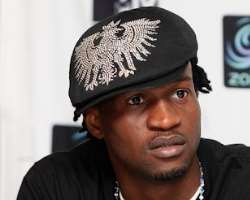 It is no longer news about the ongoing misunderstanding currently going on between the P-Square brothers as all parties involved are trying their hands in one project or the other to show they can survive without the other.

Well, like an old adage that says blood is thicker than water, fans are waiting to see how long the fight is going to last and if the brothers will finally brake up for good.

Many have been calling the brothers to unite together as their breakup will means they are upcoming artistes as they will no longer have any record of what they have done together.

Paul Okoye, who has been somehow silent in the whole issue and in action speaking with MTV base recently explained that the issue they are having is a family affair and not mearnt for the public.

According to him, “Maybe I am not suppose to say this but when it comes to P-Square, don't worry guys, it's a family problem and not a public thing, when we are done with the family, we will let you guys know, God bless.”