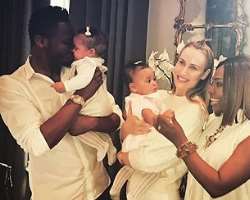 The kids who are growing fast got their parents so excited that they could not hide their joy for their kids as Olga described them as “peanuts” while celebrating them.

Olga Diyachenko and Mikel, started dating in 2013 after reportedly meeting him in London where her millionaire father runs a chain of businesses.