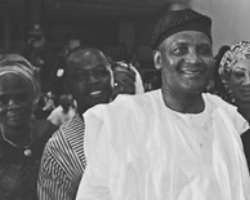 Popular Nigerian rapper Olamide, who has always claimed to belong to the street, is not relenting in taking over the street and breaks more boundaries with his music which has continued to earn him space in the hearts of many.

The singer, has been busy in the studio and with some various stage presence, he has been able to smile to the bank virtually each month that passes by.

Indeed one will agree with the singer that he truly owns the street and over the weekend, the singer was spotted with Billionaire boss, Aliko Dangote, at an event in Lagos.

The last time the duo were seen together was when he called him and Don Jazzy over to settle their rift after the Headies Award brouhaha.

One will not be surprised if it turns out that Olamide will end up being the brand ambassador for one of the billionaire's products maybe his cement, sugar or noodles.