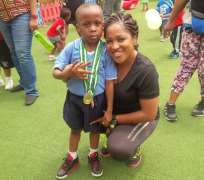 Sultry actress Grace Amah commands so much respect in the industry. Though she was off the radar for the past years, she seems ready to reinstate herself in the industry.
Precisely five years ago, the Ebonyi state had a baby for her lover boy who she had hoped to marry within few months.

However, years later, Ms Amah is yet tie the knots with the father of her baby boy but she's now enjoying the joy of motherhood.

?During the last inter-house sports of her son Samuel, the little boy who is now 5 years old carted away three gold medals for doing well and his proud mother showered him with accolades.

?"The joy of motherhood is bundles with the coming of children as they define the nature of a womanhood. Sarah sought the face of God to define her womanhood and she bore you son Isaac, a great man. Hannah prayed upon God and it came to pass as Samuel was born who became prophet and leader in Isreal. So it was about 5 years ago, when in my world, the Lord gave me Samuel. Tongues went wagging and great Samuel continued to grow and bringing joy to me and his world. Children are indeed a blessing to parents as they bring smiles to their faces.

They are God's send and sweet bundles of joy.

My Samuel participated in an inter-house sports of his school and won 3 gold medals in athletics and other sporting events. Samuel, continue to make your mom proud and rule your world," she wrote.