My Father Forced me to Sign Sony Deal…Davido Explains 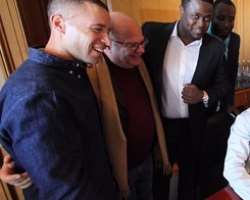 Singer, Davido, is still savouring the millions and opportunities that are attached to his Sony music deal which he penned some months back.

The singer still speaking about the deal with can't just go off his head, recently revealed that his family members actually persuaded him to taking the deal as he was skeptical about it.

He disclosed to erave that for two weeks, he refused to talk to his manager because he wanted some time off to think about the deal to know if it was the right thing to do.

“Everyone said I could do this, but my own thinking with regard to Sony was that 'why would I sign to a label when I had already worked so well in Africa to build a brand?”

“I was skeptical about the deal but my dad, sisters and other members of the family pressured me into looking at the deal. I didn't even talk to Kamal (his manager) for 2 weeks because I wanted to be sure it was the right thing to do. I told them I just wanted to drop my album because it was ready. Afterwards, they (Sony) told me they were not interested in Africa. They said I can have that (Africa) and do whatever I want with it. About eight months ago, I then said since I still had my Africa I had no problem signing the deal,” he stated.