MasterCard and UN Women Join to Advance Empowerment of Women 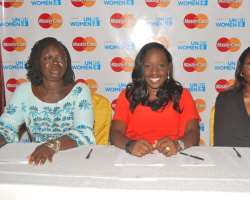 Lagos, Nigeria – March 8, 2016 – Around the world, nearly 2.4 billion people live without any form of official personal identification, and the majority of them are women. As part of broader International Women’s Day activities, MasterCard and UN Women signed a Memorandum of Understanding to address this imbalance and advance gender equality and women’s economic empowerment.

The first initiative in this relationship is the launch of a pilot in Nigeria, which aims to provide half a million Nigerian women with ID cards enabled with electronic payments functionality.

“Our partnership with UN Women is the result of a shared vision of a world where women are empowered to achieve their true potential,” says Omokehinde Ojomuyide, MasterCard Vice President and Area Business Head, West Africa . “Lack of identity is a critical barrier for women seeking to do something as simple as vote, own property or open an account to receive or send money. Together, we can make a real difference in these women’s lives.”

According to the World Bank , only 47 percent of women worldwide have access to formal financial services, compared to 51 percent of men. In Africa, this number increases to more than 70 percent of women.

“We look forward to working together and see the potential of expanding the model to benefit women also in other countries. It is also encouraging that we will collaborate on knowledge generation, advocacy and resource mobilization for greater investment in gender equality and women’s empowerment - reflecting MasterCard and its CEO’s deep commitment to a Planet 50/50 and to supporting UNWOMEN’s efforts,” she added.

Under the program, MasterCard and UN Women will further explore how and when Nigerians have signed up for the country’s national identity card program. Based on these insights, a targeted program will be launched to educate women on the benefits of the program and enroll them for the identity card.

“This campaign will help at least half a million women in Nigeria gain access to financial services, many for the first time, and the support they need to enter the country’s formal economy,” says Ojomuyide .

About MasterCard
MasterCard (NSYE: MA), www.mastercard.com is a technology company in the global payments industry. We operate the world’s fastest payments processing network, connecting consumers, financial institutions, merchants, governments and businesses in more than 210 countries and territories. MasterCard products and solutions make everyday commerce activities – such as shopping, traveling, running a business and managing finances – easier, more secure and more efficient for everyone. Follow us on Twitter: @MasterCardMEA and @MasterCardNews , join the discussion on the Cashless Pioneers Blog and subscribe for the latest news on the MEA Engagement Bureau .

About UN Women
In July 2010, the United Nations General Assembly created UN Women , the United Nations Entity for Gender Equality and the Empowerment of Women. In doing so, UN Member States took an historic step in accelerating the Organization’s goals on gender equality and the empowerment of women. The creation of UN Women came about as part of the UN reform agenda, bringing together resources and mandates for greater impact. It merges and builds on the important work of four previously distinct parts of the UN system, which focused exclusively on gender equality and women’s empowerment.