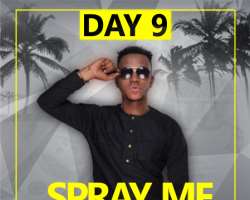 DAY9 is a young talented Naija Hip-Hop artiste. So far DAY9 has worked with a number of notable artistes in the entertainment industry.

Day9 was also the winner of the Coke Studio Africa talent competition Lagos edition in 2014. During the grand finale he performed his songs with popular music stars, Iyanya and Olamide on stage at the same time.

Other works by DAY9 include the song 'Unilag Forever' which massively trended on social media and was widely accepted by students as the theme song for the celebration of the school's 50 years anniversary.

He also featured alongside Terry tha Rapman on the soundtrack for the Charles Novia's movie titled - Alan Poza which premiered around the country.

Please enjoy and expect more to come from this musical god.