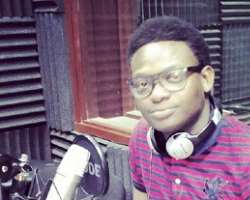 On-air-personality and public speaker, Mayour Speaks, has caused some issues after he shared his idea on what he thinks gives birth to the continuous rape causes being recorded on daily basis.

The OAP pointed that ladies are only rape because they are the cause of it especially with the way they dress, pointing out that he has never heard of an Hijab Sister Fall Victim of Rape because she is well dressed.

In his words, “I have not heard or Seen an Hijab Sister Fall Victim of Rape, Cos wat are u seeing DAT will entice u to rape her but our Young Ladies need to be taught a Lesson on MODESTY. In as Much as RAPE is bad, don't expose yourself to it, don't be a willing Prey to RAPE

“Ladies Don't wana hear "I have a Role to Play" when it comes to Preventing RAPE, they don't wana hear Why Can't I walk alone all Night. How can You Walk into a Guys room, spend the night with him and wake up telling the world he RAPED you!! You must be insane.”

He also noted that “A large Percentage of RAPE victims are those who I call 'Willing Preys.'
Adding that “Finally I say, I am not in anyway encouraging RAPE, But Please let's all Look at possible way of Preventing it and Modesty in dressing is KEY. I'm Against RAPE, but I support educating our Ladies on how to prevent themselves so they won't be seen as Willing Prey.

“Just Like You give your properties maximum security so that arm robbers won't come have access to them, give your Ass maximum and modest security.”