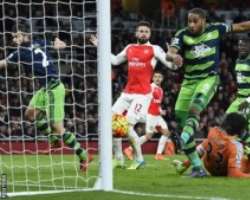 Arsenal’s hopes of landing a first league title in 12 years suffered a heavy blow as Swansea came from behind to win at Emirates Stadium.

Joel Campbell slid to hook the Gunners into an early lead and they looked set to make up ground on leaders Leicester.

Look back on how Swansea shocked Arsenal
The Welsh club now have a six-point cushion to the relegation zone but Arsenal’s six-point deficit to Leicester City at the top of the table looks sure to yield ugly headlines.

Arsene Wenger’s side have lost three successive games for the first time since 2010, severely damaging their title hopes in a season many regard as their best opportunity in recent times to be crowned champions.

After defeat at Old Trafford on Sunday, pundits lined up to criticise Arsenal’s failings. Their shortcomings were again laid bare against the Swans as they missed chances and their soft centre again cost them dear.

Swansea arrived in north London sporting six changes, with a teenage debutant in Stephen Kingsley at left-back and minus their manager, who is in hospital with a chest infection.

The early stages, in which the impressive Campbell – in for Theo Walcott – turned home Sanchez’s pass, saw the visitors struggle but then cracks emerged again in Wenger’s side.

Weak play by Mesut Ozil led to Jack Cork being allowed to create the equaliser and Petr Cech must be questioned for the missed punch that allowed Williams to turn in from a yard.

Former Manchester United defender Rio Ferdinand has said Arsenal keep failing to sign leaders and such analysis continues to look more and more astute as at no point did Arsenal pin their visitors back for a long spell.

There were inevitable boos and the same old questions will be trotted out. Where is the character? Where is the steel? Arsenal are in danger of failing and suddenly, even a top-four place does not look guaranteed.