Ibinabo Fiberesima Proves to Fred Amata That She Still Cares 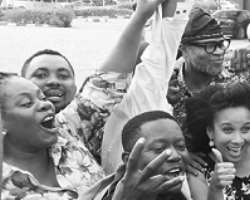 Despite not being together as each other have moved on, Nollywood actress, Ibinabo Fiberesima, is just one actress with a heart of gold as she stood by ex-husband, Fred Amata, during the campaign for the position of the Directors Guild of Nigeria seat.

The actress, took many by surprise as she joined forces with other colleagues in the industry to drum support for Fred which eventually saw him emerged as the winner of the position.

After the result was announced about two days ago, the jubilation is still in the air as she was seen jubilating with the father of her daughter while others kept cheering.