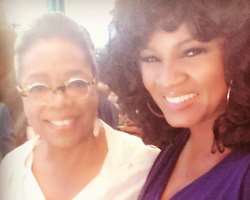 The actress is indeed a star as she was being celebrated with the likes of Oprah Winfrey, Boris Kodjoe, Nicole Ariparker, Ty Hunter and host of other Hollywood celebs.

It will be recalled that Omotola made her Hollywood TV debut, by starring in an American TV drama series shot in Los Angeles. The drama series, 'Bounce' stars Kimberly Elise, Omotola's co-star from Leila Djansi's award-winning film, 'Ties That Bind'.