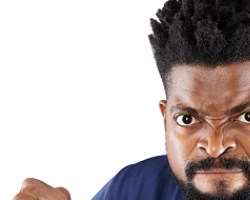 Top Nigerian comedian, Basketmouth, is not happy with the way the rise to stardom of popular bread seller turned celebrity, Olajumoke Orisaguna, as she has been scheduled to give a motivational speech in Abuja, during the weekend.

According to the comedian, “even the person that provided five loaves of bread to Jesus to feed 5,000 people did not get this kind attention.”

Although after making his point known, he deleted the post which might have caused some unhealthy arguments but that did not stop him from speaking further that with the way she is being handled, she might end up becoming the next PDP chairman.

In his words, “Motivational Speaker? With the way things are going, this girl might become the next PDP chairman.”