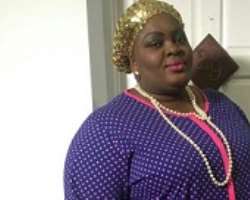 Yoruba actress, Eniola Badmus, has gotten making if her fans talking after she shared a picture of herself rocking pyjamas.

Not many are comfortable with this but it was part of her dressing for the movie 'Basira in London.' While some see it as funny, some fans believe she shouldn't have shared such picture.

For some time now, fans have been complaining about the actress body size but she seems not to care about what people are saying as she continues to appreciate her body the way it is.