'Iwobi is the star Nigeria is looking for': Kanu 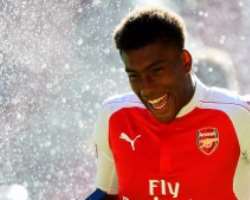 With the youngster set to make another FA Cup appearance on Saturday, the Super Eagles legend believes the forward is a star in the making

Legend Nwankwo Kanu has said  Arsenal youngster  Alex Iwobi could be the next big name in Nigerian football.

The 19-year-old has gained first team inclusion after a series of impressive displays which has caught the eyes of the manager, Arsene Wenger.

Iwobi featured for Arsenal in their fourth round FA Cup win against Sunderland and he is expected to make a return when the team welcomes Hull City on Saturday for in a fifth round clash.

With the Nigeria international already gaining attention, Kanu said that the forward has already shown a lot of potential and is ready to take the centre stage.

“He is a young lad and he has all it takes. He just needs to work hard and keep his head down and keep pushing so he gets his chance,” Kanu told Arsenal Player.

“Football is all about chances and when you have the opportunity you have to grab it. I believe he is going to make his mark. He is from Nigeria and we all support him and love him.

“He is the star we are looking for. He is going to learn a lot from Arsène Wenger and the club he is playing for – we need him to bring that back home and make sure he can help the national team.

“[He just needs to] keep his head down and not get carried away with a lot of things. Every day you train, you have to train on your weaknesses. With your strengths, you know them so you have to use them in the game,” he concluded.