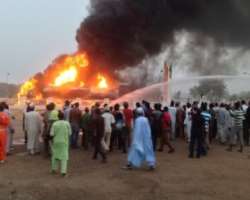 An eye witness account at the scene of the incident, observed that large flames had swallowed most parts of the entire Mosque.

The flames and smoke also covered houses and shops in the vicinities.

He said that a vehicle parked beside the Mosque caught fire and it spread to the Mosque.

“For now, we can confirm that no one was caught in the fire, but we have despatched our men to the scene to protect property.

“Once an incident like this happens, there are miscreants always taking that as an advantage to steal.

“We want to make sure that such did not happen,” he said.