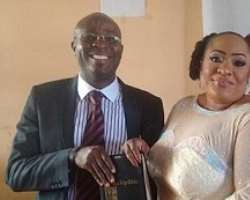 Recently, speculations which went viral about Nollywood actress, Foluke Daramola and her hubby, that the two lovers headed for the marriage registry to seal their love has turned out to be true.

The actress recently confirmed that they decided to head to the marriage registry to seal their love because it has certification to backup rather than just depend on the traditional rites which does not really have much effect.

Foluke also noted that rather than make noise about valentine, taking the marriage vow at the registry is their own best way of celebrating the valentine season. Adding that taking them four years to make the decision does not matter but achieving it is what matters.

In her words, “We decided to go to the registry because we see it as a renewal of our love. Also, for documentation purpose, it is better we go to a marriage registry because traditional marriage is not really recognised and it does not have any certification to that effect. It is our own way of celebrating Valentine. It took us four years to decide to go to the marriage registry because we felt it was necessary to have proper documentation. We are doing this to perfect our marriage. The number of years it took us to do this does not matter as the most important thing is that we are doing it.”