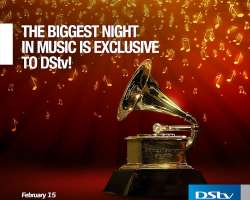 Lagos, Nigeria; 10 February 2016:It’s the 58th Annual GRAMMY Awards on Monday, 15 February and DStv will stop at nothing to bring the magic of the event live to your TV screen!

DStv viewers can tune in for the live transmission on Vuzu AMP(channel 114) on Tuesday, February 16 at 2amwith a repeat broadcast on Saturday, February 20 at 2pm and Sunday, February 21 at 8pm.

With the live broadcast, Africa will get to witness Music’s Biggest Night from the Staples Centre in Los Angeles, California and find out who wins the coveted Record of the Year, Best Album of the Year and Song of the Year.

Hot nominees for this year include Kendrick Lamarwho earned 11 nominations while both Taylor Swift and The Weeknd tie with 7 nominations apiece. Also, entertainment icon and two-time GRAMMY winner LL COOL J is set to return as host of the Awards, marking his fifth consecutive year as master of ceremonies.

Meanwhile, E! Entertainment (channel 124) will showcase hot celebrity fashion and interviews on E! Live from the Red Carpet hosted by Ryan Seacrest and GiulianaRancic starting from Monday, 15 February at 10pm with a special countdown to Tuesday, 16 February at 1am for the rest of the coverage.

The 58th Annual GRAMMY Awards will be screened LIVE on Vuzu AMPDStv channel 114 at 2am on Tuesday, 16 February with a repeat broadcast on Saturday, February 20 at 2pm and Sunday, February 21 at 8pm.