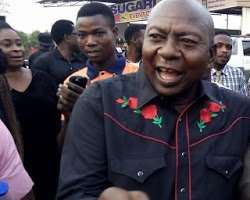 The sudden death of popular Nollywood comic actor, Dede One Day, still remains a shock to many in the industry after the news of his demise broke out in December 2015.

Dede One Day was said to be on duty anchoring an event when he suddenly slumped and died. Friends, families and colleagues in the industry have since converge to see draw out modalities on how he will be buried and recently a candle light possession was held at Luxury City hotel, Aba, Abia state, to celebrate his last days on earth.

The actor will be buried on the Saturday, 13th of February 2016 in his home town.