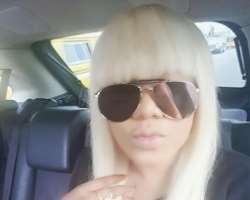 Gradually turning Nigeria's Lady Gaga, Yoruba actress, Toyin Aimakhu, is ready to serve anyone who talks wrongly at her just the way it's hot after she shared a "GaGa" looking photo on her recently.

The blond picture has gotten everyone talking and one of her fan took it to the extra mile by calling on the actress to stop the job of “prostitution” which she is being alleged to be indulged in.

According to the fan to Toyin, “go and get married Toyin, your prostitution is too much.” But madam Toyin, is always ready with response to such message as she responded with, “if I don't, who will?”

Although, it turned out to become a mild drama but the actress later ignore the fan as she continued with her fun.