If You Die, Your Man Will Bring Another Woman to Your Grave Site…Angela Okorie Warns Ladies 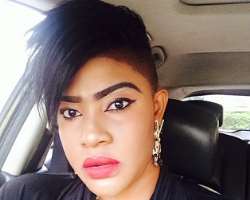 Nollywood actress, Angela Okorie, might not be having marital issues as widely sniffed but a friend of hers who is currently having a bad time in her relationship.

With the high rate at which some couples cheat on each other, the actress feels it is time for the ladies especially to be on the watchout as to what their guys are doing behind them.

She warned ladies that they should not allow their man who does not even care about them to have control over their lives because once they die; the same man will bring in another woman to her grave site.

According to her, “Do not allow your boyfriend, lover, husband, or your love one that does not care about you have control over you, if you die, he will bring another girlfriend or wife to your burial, but if he cares so much about you that he would die for you to live keep him, A friend of mine is a victim, the guy is so quarrelsome, fights like he cares, but when she was sick her Guy doesn't even care, he was just busy gallivanting.”