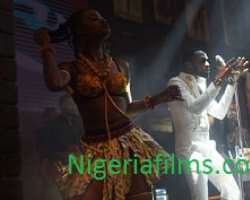 Recently, Nigerian pop star, D'banj, released is latest song 'Emergency' at the just concluded GLO CAF awards in Lagos, and while performing the song for the first time which has the Afro-Beat rhythm, he got a standing ovation from the crowd.

The video had camo appearance of Eldee Da Don, vector Da Viper and others. Photos were gotten from IceCream Film Factory