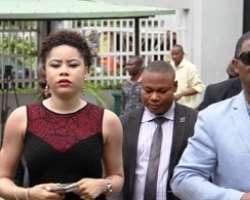 Precious delivered a baby boy and the former minister could not hide his joy as he describes the boy as his first son.

In his words, “I give thanks to God for the birth of my first son which took place today. Both the mother and the child are doing fine. To God be the glory.”

Kayode some months back was in the news after it was reported that he denied his children from his former wife since he was no longer interested in the union. He has since been enjoying the company of his babymama and he is indeed a happy man now.

Precious Chikwendu, former Miss Valentine and 2014 Miss United Nations World, who is also an actress and model, is popularly known as Snow White. She's currently living in his Abuja home and report says he's so smitten with her.