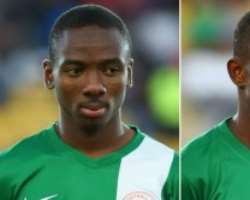 Arsene Wenger is the king of picking up talented youngster from all over the world and fitting them into the Arsenal mold.

Looks like he's at it again.
Speaking ahead of Arsenal's FA Cup fourth round clash against Burnley this weekend the Gunners' boss confirmed that moves for Nigerian duo Kelechi Nwakali and Samuel Chukwueze are progressing and should be completed before the January transfer window closes next Monday at 6 p.m. ET.

Both Golden Eagles stars excelled during their U-17 World Cup win in 2015 as midfielder Nwakali, 17, was named the player of the tournament and right winger Chukwueze, 16, scored three times and added six assists.

Both players play for the Diamond Football Academy in Nigeria and Arsenal have beaten off reported interest from Manchester City and Bayern Munich to set up the imminent deal. “We identified Nwakali as the player of the tournament, basically, and as a top player. We will see if we can manage to get it over the line during this transfer period. [If we can], we will do it. He (Chukwueze) is signing as well.”

The likes of Cesc Fabregas and Theo Walcott are examples of youngsters picked up by Wenger and nurtured into stars and he continues to have great success at replicating that model with current first team stars Francis Coquelin and Hector Bellerin also arriving as teenagers.

In injury news Wenger confirmed that defensive midfielder Francis Coquelin will return to action this weekend after getting injured in early November, while Tomas Rosicky will also be available for selection after the Czech Republic midfielder overcame a long-term knee injury.

“Francis is available to play now because he has passed two weeks of full training,” Wenger said. “Tomas is also available for selection.”

Another boost for the title-chasing Gunners is that striker Danny Welbeck is back in full training after suffering a knee injury that has kept him out since lats April. The England international, 25, is short of match sharpness but will play a part in the run-in.

The only two players out of Arsenal's squad at the moment are Santi Cazorla and Jack Wilshere who are both returning from injury, while Per Mertesacker will not feature on Saturday against Burnely after receiving a red card against Chelsea.