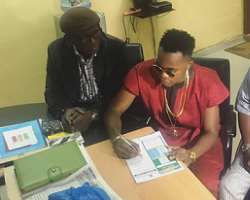 Recently, popular Nigerian dancehall singer, Patoranking, has been seen dinning with some top government officials like Senate President, Bukola Saraki and others and many have been wondering what's in the pipeline for the singer.

Recently, he was with some Lagos state government officials and this time it was for a big purpose which is the Lagos City Marathon Expo, which will be coming up soon.

The singer penned down his name as one of those that will be taking part in the Marathon which is a 42 kilometres race.

He met with the commissioner of youths and sports Lagos state, while he was taken round some of the sports facilities ahead of the Marathon race.