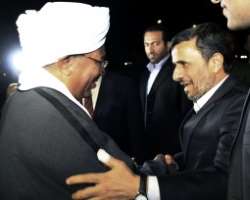 Earlier this month, the Sudan News Agency reported that the country’s National Dialogue Conference endorsed “normal and conditioned” diplomatic relations with Israel.Khartoum has already switched sides in the unfolding Saudi-Iranian cold war, cutting off diplomatic ties with its former partners in Tehran at the behest of its now even closer Saudi allies.

But diplomatic relations with Israel would be an even more stunning development.

Sudan is one of over 30 countries that does not recognize Israel, and it is a party to the Arab League’s official boycott of the country .

Sudan has also been a staging area for Iranian weapons trafficking to armed groups in the Gaza Strip, including Hamas.

Israel is suspected of carrying out attacks on weapons smugglers inside Sudan several times in recent y ears, bombing a smuggling convoy in 2009  and carrying out an attack on Iranian-linked military facility in Khartoum in 2012 .

An actively (or at least until recently) hostile state would be opening relations with Israel without any apparent precipitating event — a virtually unknown development in the seven-decade history of Israeli-Arab relations.

Sudanese relations with Israel could be beneficial for both countries. Israel will have effectively “turned” a former Iranian ally that its air has bombed repeatedly since 2009 .

View gallery
.
(Google Maps/Amanda Macias/Business Insider)
Perhaps more importantly from an Israeli perspective, ties with Sudan would have shown that improved relations with once-hostile Arab states isn’t necessarily contingent on a resolution of the Palestinian issue.Relations with Sudan — now a notable member of the Saudi anti-Iran coalition — would de-link regional diplomacy from the peace process with the Palestinians, potentially enabling more open relations with countries like Saudi Arabia and creating a precedent for future cooperation with Arab states.

At the same time, such a development might also give Israel less of an incentive to take steps towards making peace with the Palestinians.

For Sudan’s National Congress Party regime, the nominally Islamist dictatorship that has ruled Sudan since 1989 and once hosted Osama bin Laden, a surprise detente with Israel would serve as shortcut to the government’s most coveted foreign policy goal: normalized relations with the US, which considers Sudan a state sponsor of terrorism and has sanctioned the government over its human rights record in Darfur and elsewhere.Diplomatic relations with Israel could the draw the US closer — without forcing Khartoum to dial back its brutal military campaigns in Darfur, Blue Nile, and Southern Kordofan.

Under an optimistic scenario, Sudan could turn into yet another pillar of the US-sponsored regional order, receiving the same kind of military aid, diplomatic cover, and economic incentives Egypt and Jordan enjoy in return for maintaining their peace agreements with Israel and aiding Western security objectives in the broader Middle East.

But would such a diplomatic break though plausibly happen?

An Israel thaw carries some big internal risks for the NCP, which took power in 1989 and was known as the National Islamic Front until the late 1990s.”There is no domestic appetite for normalization with Israel,” Sudan commentator Ahmed Kodouda told Business Insider. He suggested that news of the discussion of open ties was meant to give the impression that Sudan’s political environment is more open than the regime’s critics claim: “The government wants to give an ostensible sense that there is so much freedom that it is letting people discuss such a taboo subject,” Kodouda says, “when in reality, any such normalization would be a hard sell. ”

Alberto Fernandez, current Vice President at the Middle East Media Research Institute and the Charge d’Affaires at the US embassy in Khartoum from 2007 to 2009, agrees that the NCP risks internal blowback if it upgraded relations. “It gains something with the West but it loses domestically,” Fernandez told Business Insider, adding that relations with Israel would then “become one more issue that cna cause more turbulence internally.”

The NCP has no shortage of those. Sudan is internationally isolated. The government is dependent on revenue from oil that is extracted in now-independent South Sudan but which travels through pipelines in the Republic of Sudan.

View gallery
.
(AP)
South Sudan.
Oil is down to under $30 a barrel, and in the 5 years since South Sudan seceded the two countries have yet to come to any kind of a stable agreement on how the oil money should be split. Khartoum is still contending with insurgencies in both Darfur in the west and the Nuba Mountains region in the south.Close ties with Israel might give an exhausted Sudanese populace yet another grievance against an oppressive government. And at the same time, it would highlight the NCP’s evolution from an ideologically Islamist regime to a run-of-the-mill autocracy concerned with little more than its own survival.

That doesn’t mean that closer relations wouldn’t be tempting for Khartoum. According to Koduda, establishing ties with Israel is a topic of “semi-recurring debate among the Sudanese elite.” There’s plenty of circumstantial evidence that Sudan’s government isn’t implacably anti-Israel.

A 2009  US embassy cable published by WikiLeaks quotes Sudanese intelligence chief Salah Ghosh as telling US diplomats that he would like to see a halt to the use of Sudanese territory for weapons trafficking. “The Sudanese regime is not seeking a confrontation with Israel,” Ghosh reportedly said.

Weapons smuggling across Sudan into Egypt and the Gaza Strip has effectively halted in recent years, to the reported satisfaction of Israeli officials. And the NCP might just be pragmatic enough to open relations — or at least to give the impression that its’ considering opening relations — if it saw a benefit in doing so.

“It’s a regime which has been hugely successful in one thing, which is remaining in power,” says Fernandez. “While they are Islamists, they’re also creative and they’re looking for ways to stick around.”

If Sudan opted for full ties, it would become the 3rd Arab League country to recognize Israel and the first since Mauritania, in 1995 . Israel maintains limited or covert diplomatic relations with a number of Arab countries, and opened a diplomatic office  at the International Renewable Energy Agency  in Abu Dhabi in 2015.Fernandez says it remains unlikely that Sudan would take such a bold diplomatic move unless it occurred in concert with understandings bout enhanced relations with the US. Given the domestic risks, he believes the gain to the NCP would be “negligible” if Sudan went ahead and established ties.

And it if happened, it would show the degree to which a formerly anti-western government has now come to believe that its survival depends on closer ties with the United States.

“They’re ideological, they’re Islamists and they continue to be,” says Fernandez. “But they’re not blind.”