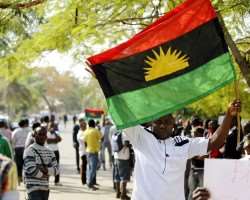 The European Union (EU) has said that questions of self-determination and changes to national borders are concerned, they are best regulated in accordance with established international law and relative customary practice”.

The EU in response to a letter  by the Organisation of Emerging African States (OEAS), seeking self-determination of a Biafra government, said that it was in constant dialogue and co-operation with Nigerian government and that it follows developments in Nigeria closely.

The group had written to the EU's High Representative for Foreign Affairs and Security Policy, Miss Federica Mogherini, stating reasons for the call for secession.

One of the reasons was that Biafra was Africa's first true post neo-colonial state that corresponded to no known former colony.

The OEAS claimed to represent the Biafra government in exile which was said to have been established in 2007 in Washington DC, as the external continuation of the Republic of Biafra.

A letter from Miss Mogherini's office stated that “the EU has a longstanding, multi-faceted relationship with Nigeria and engages in regular dialogue and cooperation with the government and civil society”, adding that it followed all political developments in the country very closely.

The EU representative also said that “as far as questions of self-determination and changes to national borders are concerned, they are best regulated in accordance with established international law and relative customary practice”.