I Need a Record Label to Sign Me…Kehinde Bankole 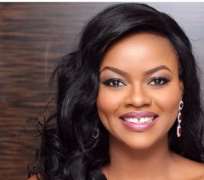 When one comes in contact with some Nigerian singers today and ask them when they started singing the response will always be “I started in the church when I was very young or I started singing from my mother's womb and so on.”

But it's all good as it is believed that whatever one is going to become in the future it will always be seen from a tender age as this is the case of Nollywood actress, Kehinde Bankole, who has been learning acting during her church days while writing her O'level exams and also going for choir rehearsals.

Doing fine in her acting career, the actress has just hinted that like some of her colleagues, in the industry, she might likely be seen delving into music as it has been part of her everyday live.

She said though not yet well planned but if given the opportunity by a record label, she is likely to grace various stages with her music abilities.

“Music is a part of my everyday life. I minister in songs and I believe that music is part of me. I have not given it a serious thought but if I get a record deal or my partners and I are asked to sing in a concert, we will take it. Music is part of my work and my personal life,” she said.