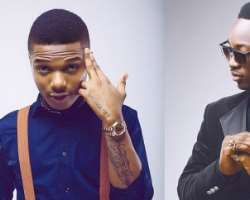 The Nigerian entertainment industry is getting more and more interesting by the day especially with the way the year 2016 started with beefs between two record label owners, Don Jazzy and Olamide and down to two talented singers, Dammy Krane and Wizkid.

The duo have been good friends until some days ago when Dammy Krane felt cheated and had to come out to publicly accuse Wizkid of stealing some part of his content which he had recorded.

Many entertainment lovers were still wondering what could have possibly transpired between the two as some had come out to criticize Dammy Krane's way of handling the issue, but the truth is finally out.

Dammy Krane has just come out to tender and apology note to his fans for the way he went about handling the issue stating that he could no longer bear the way Wizkid was going about making name with the contents he stole from him without his consent.

He disclosed that slangs like, Park, baby pull over, baba nla melodies both chorus and verses, were recorded in his house by him (Dammy Krane) in his studio.