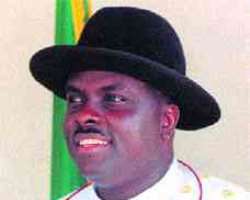 In a statement, the Force Public Relations Officer, Emmanuel Ojukwu on Tuesday in Abuja said the IGP gave the directive following a High Court order to the police to produce the embattled former Delta State chief executive.

According to the Police Spokesman; 'The IGP has directed DIG Ekpo U. Udom currently on special duty to Delta State to coordinate the arrest alongside the AIG Zone 5 and the CP Delta State. The exercise is ongoing', the statement read in part.

The Economic and Financial Crimes Commission (EFCC) had last week declared Ibori wanted over financial scam during his tenure as governor of the state.

Meanwhile, reports from the State indicate that Ibori might have escaped from the country since last weekend through the help of some militants who are loyal to him.