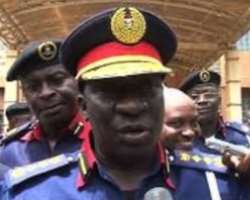 The Nigeria Security and Civil Defense Corps (NSCDC) disclosed Monday in Kaduna the arrest of six tanker drivers who allegedly diverted 148,000 litres of Premium Motor Spirit (PMS) to the state.

Kaduna State NSCDC Commandant, Alhaji Modu Bunu made the disclosure while parading the suspects before newsmen.

Bunu said that the tankers were impounded on Saturday at an undisclosed location within the state, adding that the product was meant for Abuja, Jos and Kano, but was allegedly diverted to Kaduna.

According to him the arrest was based on intelligence information leading to mobilization of his men until the suspects were apprehended at about 12:15 a.m. on Saturday within Kaduna State.

“The third one with registration number BAU 262 XR was carrying 45,000 litres suspected to have been diverted.

“In the same vein, the remaining truck, a DAF 85, is without registration number and was conveying 33,000 litres of PMS.

“The apprehensive occupants of the DAF on sighting operatives of the NSCDC, abandoned the vehicle and took to their heels.”