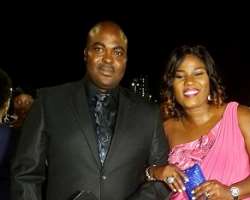 The New Year 2016 is indeed starting up in a new note as Nollywood actor, Emeka Osai, has just moved into his newly completed home in Ikeja, Lagos.

Emeka, who is rarely seen in public and loves keeping a low profile status, just completed his Eight bedroom in December 28, 2015 and did a house warming party where he invited few friends in the industry to make merry with him.

Just the same day he completed his new home, the actor celebrated his 8th year wedding anniversary with his lovely wife, Jumai, as they hope the Year 2016 will be full of greatness for each and every families.

Some of the celebs who were in attendance include, Chico Ejiro, Fidelis Duker, Fred Amata and others.