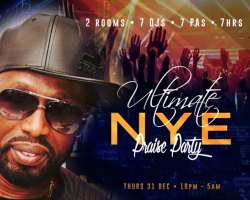 Shoggy Tosh's Pamoto featuring Henrisoul has been breaking a number of records in only 10 weeks after being released. The track has over 160,000 downloads on My Not Just Ok, the music video directed by Femi Best Touch has over 30,000 views in 3 weeks, the song was #1 for 7 consecutive weeks on ITV Radio 92.3FM Benin's Top 10 Gospel Chart, #8 on the UK Christian Chart (November 2015), and has won 3 International awards at the 2015 London PGMA awards, London's Gathering of Africa's Best Awards, and the Akademia awards in Hollywood, USA.

The Ultimate NYE Praise Party is a DJ-led club night or as we like to call it ‘Praise Party’. With 2 rooms of dancing with 7 top Christian DJs on rotation all night. Plus 7 special guest live performances. This promises to be the ULTIMATE New Year’s Eve party.

TICKETS: £10 Standard | More at the Door