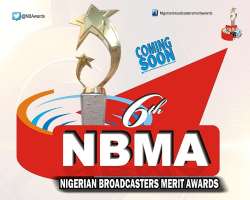 That the annual Nigerian Broadcasters Merit Awards (NBMA) has shifted base from Lagos is like stating the obvious. It actually makes no news to those in the know that the Capital City, Abuja is the first stopover for NBMA’s moving train!

After successful hosting five editions, it’s about timeother regions had the feel of the pioneer award for the broadcasters in Africa/ Nigeria.

However, due to some circumstances beyond our control, this year’s NBMA earlier scheduled for 23rd January, 2016, has been shifted tillFebruary 27th.

The sixth edition of the Nigerian Broadcasters Merit Awards (NBMA) is now slated for Saturday February 27th, 2016, at the prestigiousBARCELONA HOTEL, Wuse 2 Abuja.

And more news... Nominees’ Party for the sixth edition of the Nigerian Broadcasters Merit Awards (NBMA) is billed to hold on Saturday 23rdJanuary, 2016, at the new celebrity hangout, HEIRS PLACE/LOUNGE Ibadan, Oyo State.

It’s going to be a gathering of broadcasting heavy weights and society big-wigs. Among the lined-up programmes that will add glitz and glamour to the event, includes a red carpet reception, live studio broadcast, fashion display, command performances from top rated music stars and humour merchants, as well as other side attractions.

As we gear up for the 6thNBMA, below is a schedule of activities

- January 23rd, 2016: Nominees' Party and official release of confirmed Nominees’ List, while VOTING is expected to start by 11:59 pm of same date

The Sixth Nigerian Broadcasters Merit Awards packaged by CrystalPearl Communications, promise to be an edition to remember. You can't afford to miss it!