FG to involve EFCC, DSS in prosecution of pipeline vandals 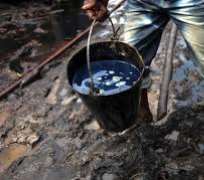 Indications emerged Sunday as the federal government intensify efforts to curtail incidences of pipe line vandalism by involving the EFCC and DSS in prosecution of vandals.

This development was made known to newsmen by the managing director, petroleum products and marketing company (PPMC), Mrs. Esther Ogbue on Sunday during a visit to Mosinmi Depot and Ajebo pipeline in Obafemi Owode local government area of Ogun.

She listed the security agencies to be involved as the Police, the Economic and Financial Crimes Commission (EFCC) and the Department of State Services (DSS).

According to Ogbue, the involvement of these agencies would facilitate the prosecution of the vandals at the courts of competent jurisdiction.

“We are looking at all ramifications on how to bring these criminals to book; they have to be treated as criminals and pipeline products thieves.

“The pipelines are the most efficient way of moving products and then for the first time in a very long time we are pushing products all the way to Ibadan.

“We intend to move to Ilorin, reduce bridging from Lagos area so that people can go and pick up their products in Ibadan and Ilorin,” Ogbue said.

She expressed optimism that partnership with EFCC, DSS, Police and host communities would yield positive results and the culprits would soon face the full wrath of the law.