Steve Harvey Makes Another Miss Universe 2015 Blunder! Find Out What He Did Again 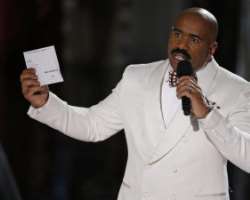 SAN FRANCISCO, December 24, (THEWILL) – Following Steve Harvey's gaffe on Sunday night, when he mistakenly announced the wrong queen winner of the Miss Universe 2015 pageant, the comedian tendered his apologies for the error, which has been trending worldwide since the incidence.

According to Harvey, his cue card was responsible why he misread the names. “I feel horrible for the two countries. I feel horrible for the fans. It was a mistake,” he told reporters during a press conference after the show in Las Vegas. “The dishonourable thing would be to just leave it like it was. It didn’t deserve to happen that way, but it happened from an honest mistake”.

“It said first runner up and I went, 'Oh my goodness.' I didn't remember it from rehearsal because nobody knew the winner in rehearsal”, he added.

As the veteran comes under fire for his costly mistake, others have since shown him support saying it could have happened to anybody. One of his staunchest supporters so far is his wife, Marjorie who also took to social media to lend support to her husband as the backlash poured in. She wrote; “You are a Stand Up Man and A True Class Act the way you went back out on the stage on live TV and took full responsibility alone,” she wrote on Instagram Monday. “I am so proud to be your wife! I love you.”

Amidst the barrage of criticisms for Harvey's mistake, designers, art directors, Digital analysts and many more are now at logger heads as to weather the cue card could really be at fault for the on-air blunder.

A photo of the cue card in question has surfaced and it shows the second and first runners-up written on the left hand side of the card. The winner was then written in the bottom right hand corner, a position that could easily have been overlooked thanks to the excitement of the moment. Unfortunately for Steve, his attempts at apologizing on twitter only got him more criticism as he spelt Colombia as “Columbia” and the Philippines as the “Philippians”. (Seriously who does this?) Some conspiracy theorists have even gone as far as saying the whole incidence was a publicity stunt to create more awareness for the Miss universe pageant.