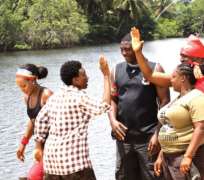 Mother luck was definitely on the side of female rap artiste, Weird MC, or she would have been shown the exit like Funke Akindele, in the ongoing Gulder Ultimate Search: Celebrity Showdown.

Apart from luck anyway, her fivestar performance in the previous week gave her immunity to stay back in the show.

According to the anchor p and task master, of the show Genevieve Nnaji, despite taking the rear in the task of last week, Weird MC escaped eviction because of her Immunity from eviction based on her sterling performance last week.

Though there was no eviction from the house, the eviction bug caught up with Princess who said she feared being evicted though she had not given it much thought.

Meanwhile, Darey was the man of the moment last week as he led in the task. His excellent performance got him to enjoy a fabulous treatment in a five star hotel.

Chioma Chukwuka and Muma Gee are still on each other's throat that one wonders if they had beef for each other before they entered the show.