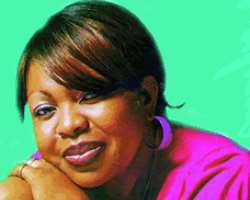 While most Nollywood celebrities' marriages have crashed painfully for reasons best known to them, Jennifer Eliogu Uchenna is one of the fortunate people in the industry whose marrriage has survived the pressures.

In spite of all odds, they have successfully coped with the challenges. She can't thank God enough for keeping it intact.

In a recent encounter with us, the pretty actress, who said that she met her husband through a phone call, revealed what is responsible for the success. She also bared her mind on a wide range of issues including marriage, Nollywood and her personality, among others.

How was growing up like?
I grew up in a family of seven. We are four girls and three boys. Growing up was fun but tough. I had everything I needed as a child. 1 had the opportunity to have come from a fairly comfortable family. But I had a very strict father. It was tough because we couldn't make as many friends as we would have wanted to. We couldn't go out when we wanted to.

I never received visitors in the house, be they females or males until when I was in my mid-20s.
At a point, I felt I had gained independence to move out of my father's house. This was sometime in 2004. I was born and bred in Lagos.

So far, I would say that the upbringing I had at the time I thought my father was too strict, helped mould me into the person I am today and I am grateful to him for that.

Which category would you say that you belong to-made or born actress?
I will let you speak for me. What do you think?

I know that I am good at what I do and I know that I didn't learn to act. I grew up acting. Although, I never really knew I was going to be an actress. I thought I was going into music. I used to see myself as a pop star, singing on stage, people cheering and clapping and all that, but as God would have it, I went into movies first and so far, I don't think I have done badly or what do you think?

How have your fans reacted so far to the parts you played in Nollywood?
It's amazing. Sometimes it makes you feel like Uuh ... I am special but even at that, I try not to forget that I didn't make myself. I was not responsible for my succeess. It is the grace of God and the love from fans.

Would you say you are fufilled now?
I can't say I have reached the peak because so far, I have done well but I aim higher. You know you cannot get to the peak of what you do, you can only get better by the day and I strive to get better.

How did you meet your husband?
That's a crazy one. That is one story I have tried not to tell on the pages of newspapers, but it's ok.
Well, I met him on the phone. I had this fan of mine; a woman who has two grown-up daughters. I met her in the Church.

She said, “I wish I had a brother who is ready to get married, I would ask him to marry you because I love you so much”.
Thereafter, she started inviting me to her place and every time she called, I would not respond. Fortunately, one day she called and said she was not asking for money and that she wanted me to be her friend. When I visited her as promised, somebody called her on the phone while she was in the bathroom and she said I should pick the call which I did. According to her, the caller said he was impressed with the way I answered the call and that he wanted to marry me. That was how I met my husband.

Initially I was rude to her, but after a while when he was persistent, I changed my mind about him. Despite my rudeness, he was nice and calm. He said, “I understand, it's okay” and funny enough he is not a movie person. He never knew people by name, when he was told I was an actress. I told him he was free to call me any time he wanted and that he should not pester my life and he said it was ok.
We kept talking on the phone as friends until he came to Nigeria.

Do you share the view that celebrities' marriages don't last?
First, I don't believe that. It is not my portion in Jesus' name. Secondly, because we are in the eyes of the public, it looks as if it only happens in the movie industry. Everyday, you pick up those magazines and you read about divorces and separations from every quarter. It happens every day. It's not about the movie industry. Because we are celebrated, everything about us becomes celebrated. I don't believe that marriages of celebrities do not last. Sometimes, I hope you realize that some people want you because of your appearance on the screen. You find out that because it is not true love, it fades away with time, and then you begin to have problems because you are not compatible.

I believe in marriage, I believe in relationships, I believe in love, I believe in friendship. As I speak to you today, I married my friend because we can talk about everything, but you know no one knows tomorrow, we can only pray for the best, you can't tell tomorrow from today. So, all you do is keep asking God for mercies. You are not better than anyone out there who has a failed marriage. I hate being overconfident that it can never happen to me.

You can never say, never. It is only God that sustains a marriage. It is you in the marriage that knows what you are going through. Sometimes there are a lot of external influences because you are a public person; people have a very negative view of you as an actor or actress. People tend to believe that you are wicked because of the role you played in a movie. It's make-believe. Sometimes, we allow stardom to get into our heads.

We start to live larger than life believing that whatever we are doing is by our power and not by the grace of God. When you don't appreciate what you have, you lose it.Every day I keep on asking God to open my eyes to the understanding that what I am today is His doing and not mine.

If you are privileged to come back to the world the second time, would you marry your husband again?
Yes, I would. So far he hasn't given me any reason to regret marrying him but I know he is not a saint. He has his shortcomings and I have mine. I think we are together so we can tolerate each other. I would marry him again.

Since you got back, how has it been trying to stage a comeback to Nollywood?
Initially, it was difficult to stage a comeback because people give you scripts and what they offer you is paltry. Then I felt it was better not to do any job rather than being paid peanuts. Imagine me being offered 50,000 or 70,000 as against what I used to earn. That is ridiculous. I have a residence permit. I shuttle and I try to be with him as much as I can. So, when I came back, I decided to spend about six months to make sure that I return to the industry and some people would want to take undue advantage of you. I am going to break that jinx because I wouldn't be doing this job just for the sake of money but for the love of it.

How has it been since you got married?
It's not a bed of roses.

Which of the films can you consider most challenging?
Honestly, I can't say exactly. I expect more challenging roles; I leave an open mind for very challenging role. I have played a couple, a doctor, a lawyer and being a lawyer you have to be firm and have all these law terms in your head, all the provisions of the 1999 constitution. I played all sorts of roles and they were all challenging. Recently, I played a widow.. . It's not my portion. I cried all through. It was a crazy script. I lost my husband and 48 days later, I lost my children. So, you can imagine how hard it was for me. It was a crazy world. I was tormented by my in-laws. I mean, it was crazy. That was my experience in that movie. Well I am glad we made the best of it and I am still looking forward to very challenging roles.

How do you cope with male admirers?
It's not been easy, you know people are attracted to you naturally and when you say, “I am married”, they still persist in their request for a relationship. I try to be nice so that they won't feel too bad. When I realised that they are insistent, I become too tough to drive them away.

What's your favourite food?
I can eat rice all through the year.

What about your husband?
He likes okro soup and pounded yam. He too can eat that all through the year. He is from Abia State. When I am travelling, I always buy okro and ogbono because he likes it.