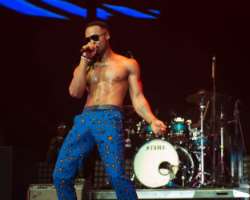 The BET Experience Africa 2015 had some of the biggest names in the International and African scene light up the Ticket Pro Dome yesterday, December 12th in Johannesburg, South Africa.

The festival which had various activities throughout the day reached its peak with a mind blowing concert with performances from R&B superstar, Maxwell, Mary J Blige, Young Thug, Raphael Saadiq, Diamond Platnumz, Nigeria's very own Flavour Nabania and South Africa's AKA.

During the show, International award winning singer and guitarist, Raphael Saadiq gave a tribute to Nigerian music icon, Fela Anikulapo Kuti with different renditions of his music with videos of the late Fela playing in the background.

Nigerian highlife superstar, Flavour who wore a blue african print pants and a black shirt gave female fans a run for their money as he took off his shirt on stage during his performance.