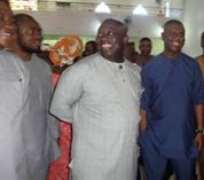 The Rivers State Chapter of the All Progressives Congress (APC) has alleged a gang-up against former Governor Chibuike Amaechi by some powerful forces in the State desperate to ensure that he does not get appointed into the cabinet of President Muhammadu Buhari.

“These retrogressive forces led by the State Caretaker Governor, Chief Nyesom Wike, are so afraid of the shadow of Rt. Hon. Chibuike Amaechi that they are willing to go to any length to ensure that he is not accommodated in President Buhari’s cabinet.

They have for months mounted a relentless campaign of calumny against the person of Amaechi, thus biting the finger that once fed them. This is not only shameful but also a clear sabotaging of the greater interests of Rivers State,” the State APC Chapter said in a statement issued on Tuesday in Port Harcourt and signed by its Chairman, Dr. Davies Ibiamu Ikanya.

The party said it learnt with shock of how Chief Wike reportedly ordered a trailer-load of his favourite brandy, Louis XIII of which a bottle costs N1.7m, to celebrate the non-appointment of Amaechi as the Secretary to the Government of the Federation (SGF) by President Buhari and that he has set up a committee to bribe and influence the Senate to reject Amaechi in case President Buhari nominates him as a Minister.

“We wish to advise Wike, who is well known for his corruptive tendencies, to desist and stop trying to play God. We are confident that he can never constitute a stumbling block to Amaechi if President Buhari wishes to nominate him to render service to his fatherland in any capacity,” Rivers APC said.

The party equally berated those who have been sponsoring stories claiming that Amaechi was so shocked by his non-appointment as SGF that he took off for London to get himself together. “Funny enough, Amaechi was in Port Harcourt to witness the formal commissioning ceremony of a church,” Rivers APC said.

The party described the efforts to rubbish and diminish Amaechi as an exercise in futility as nobody will deny the fact that he played a pivotal role in sacking the corrupt regime of Dr. Goodluck Jonathan and installing the current government at the centre, thus making him a hero of Nigeria’s modern democracy.

The statement urged Amaechi to be steadfast in his support for the administration of. President Buhari which he put his life at risk to make possible, while urging the party’s supporters and admirers of Amaechi “to exercise patience and allow President Buhari to conclude his appointments before we can pass any valid judgment.”