Photos: Kanye West Announces Intentions To Run For President In 2020 At Mtv Vmas 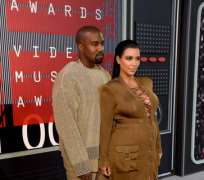 Kanye West received the Michael Jackson Video Vanguard Award at last night's “MTV Video Music Awards” in a 13-minute speech in which he reflected on his life and work, artistry and consumer culture - not to mention his at times tenuous relationship with award shows. Upon receiving the award from Taylor Swift, West expressed regret at crashing the stage during the 2009 “MTV Video Music Awards”, but remained defiant in his defense of artistes. Then he declared his intention to run for President in 2020…

Nicki Minaj opened the show perched atop a throne sculpted of backup dancers to tear through banger “Trini Dem Girls.” Minaj then segued into her soaring single “The Night Is Still Young” and, though indeed it still was, the surprises started early.Taylor Swift unexpectedly emerged from below the stage to join Minaj for the performance in an epic, chill-inducing squashing of beef.

The Weeknd performed a muscular, funky version of hit “Can't Feel My Face” while bathed in red light. The Canadian artist shuffled around the stage before settling into a ring of fire that blazed up from the floor below and rotated around him.

In one of the show's most anticipated moments, Justin Bieber's triumphant return rose to new heights as he took flight above the crowd to punctuate a medley of his hit Jack Ü collab, “Where Are ÜNow?” and newly released single “What Do You Mean?” After a dramatic solo entrance in silhouette, Bieber blazed through the tracks and some tight choreography before the room went black, and the star reemerged in a single cone of light to fly high above the stage. Bieber returned to the ground winded and moved to tears.

For the final performance from the downtown block party, Pharrell Williams gave an explosive performance of his emancipation anthem “Freedom” under the night sky. Williams open with a spoken word freestyle before being joined by a troupe of dancers, who ripped through a routine of throwback dance moves that matched the retro-swing of the track. The performance concluded with a single firework shooting into the air about Broadway.

In a surprise performance, host Miley Cyrus closed the show with psych rock legends The Flaming Lips for her beautifully bizarre new track, “DOO It”, which invokes love, peace, the universe and flying saucers. Cyrus emerged from an LED screen projecting extreme close ups of her glitter and sprinkle-smeared mouth, and was followed close behind by a brigade of drag queens in fluorescent unitards. In a stunning turn of synergy, many of the girls were veterans of “RuPaul's Drag Race”, the hit series on MTV's sister network, Logo.

VIDEO WITH A SOCIAL MESSAGE
Big Sean ft. Kanye West and John Legend – “One Man Can Change the World”