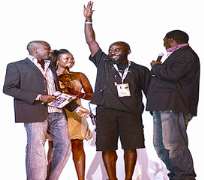 Is bohemian the right word to describe him? Not really; but definitely, he is one that goes against the grain – at least, on the outside. This is probably one of the firsts that attracts him to you, or

makes you avoid him. Whatever your reaction to his persona, there is no denying the fact that he is damned good at his job.

In his office during this chat with this reporter, he is seated behind a desk dressed in a safari-designed short-sleeved shirt with beige combat shorts. He has two rosaries round his neck. His feet are unshod but a pair of brown flat sandals lies in the crowded table. His table holds quite a number of items including a lot of papers and two pretty-looking ashtrays. After some five, seven minutes on the phone – and in between doing something on a laptop, Edi Lawani finally looks up.

His look always seems to be the same because he more often than not dresses in the same way – simple short-sleeved shirt, shorts and sandals. And you can't blame him; after all, comfort is his goal when he dresses. This is probably a good place to start from. “I just think of comfort first of all and this is what I feel most comfortable in. However, there are times I have to wear other things. When I am going to church for instance, I wear a pair of jeans trousers. To the club also, I need to have on a pair of trousers since shorts are not allowed there. So, it is not as if I don't have trousers”, he says laughing. “There are just some times when you have to dress in a certain way. If you are a clergyman, no matter how hot you are or uncomfortable you feel, you must wear a cassock, socks and all the other items of clothing that make up that religious apparel. But, since I am fortunate to have a job that doesn't follow any particular dress code, then comfort is my watch word”.

His heavily bearded face really gives him a hard, far-reaching look but his tone of voice shows that the dark-skinned man is really down-to-earth.

Over time, Lawani has preferred to stay in the background of a rather 'noisy' industry – entertainment. Recently though, he came from behind the curtains to champion a cause with other stakeholders in the music industry. Months ago, the Collecting Society of Nigeria (COSON) was born and all of a sudden, more and more Nigerians got thrown into the fight against music pirates in the country. Why did he decide to get involved in COSON and the entire struggle, especially since he is not a performing artiste? “I spend a fortune back into the music industry. The issue of intellectual property – where an individual has sweated and come up with; be it a piece of painting, lyrics – recognizes that works do not just fall from heaven. It takes people or a group of persons working in concert or alone to create works. And they spend time and energy to do that and should be paid. Music is played on radio for the listening pleasure of listeners, sometimes accompanied by images we call musical videos. Music is used by advertising agencies as sound tracks for brands; even ring tones for your phones and they (the musicians) deserve to earn money for their sweat. Every individual artiste cannot move from radio station to radio station to collect monies for their works that have been used, so they appoint people to take care of this issue of collecting money. But in Nigeria, right from the colonial era, you would find that there are a lot of things we inherited from the Performing Rights Society (PRS), affiliates of the corollary organization, PRS in the UK. Those people even helped Nigeria to collect their money from abroad. And this wasn't it being done right”, he explains.

The two major collecting societies in Nigeria back there were the Performing Music Rights Society (PMRS) and the Music Copyright Society of Nigeria (MCSN) didn't really seem to help matters. The problems persisted. There were still some outlets that these pirates used. “The excuse they now had is that people would come and say: 'I am the one representing Daddy Showkey'. Maybe Showkey two or three years down the line, moves to another record label, those ones would now say: 'Pay us for Daddy Showkey'. The companies would say: 'We don't know who to pay to'. That was the major reason. There might have been other reasons, but that was the major reason; and also getting people, artistes to be more and more responsible for music business profession. That was how A.M.B.Pro came about of which I am interim president”.

A.M.B.Pro (which stands for Association of Music Business Professionals) consists everyone that has a stake in the Nigerian music industry including record label owners, artiste managers and marketers.

“We started reaching out to different facets and different organizations that make up the music industry; from record plant owners, distributors to marketers, to all the collecting societies themselves – PMRS and MCSN, Alaba people – those that play an integral part in the music industry, NARI and all of that. We brought them all together to say: 'We have heard you. There are some issues you have mentioned that we need to respond to. We need to put our differences aside'. That was how COSON was formed. And we have carried on from one meeting to the other; meetings with government in terms of copyright infringements. That is more desirable as there are many people, units and organizations that will hear our cause so that we can achieve better results. So if nothing else, nobody would wake up now and say: 'I don't know who to pay to', he says.

Unknown to many, COSON is not a new invention. COSON is an idea that has been there for a long time; since King Sunny Ade's reign as PMAN president. Unfortunately, the idea had been muted before.

One is wont to believe that these group of music entrepreneurs are pushing this campaign for their own selfish interests as well but Lawani thinks otherwise. “Our interest is that we have spent money in the industry and there are too many problems that haven't been resolved that is threatening the investments that we have”, says Lawani.

In the middle of last year, Nigerian musicians embarked on a period of hunger strike asking the government to shut down the Alaba international market. Although, the strike action recorded a level of success, some marketers and critics of the industry believed some of the biggest artistes weren't part of the protest; hence rendering the action ineffective. To this observation, Lawani has this to say: “Instead of looking at the good side of a thing, some people would rather look at the negative side. Even if you say everybody should come and take one million dollars today, you cannot get all the Nigerian artistes together at a go. If P-Square is not in America, they are in Tanzania and so on. And the whole idea is that there are people who would always be in the forefront. Look at Usain Bolt. He has broken the world record in 100 metres. You recognize him but most people forget that there is a coach somewhere who worked on him. What I can tell you is that they (the artistes) all feel the pain. What do they have to lose? If it gets better – P-Square is making N10m. They can now raise their fees to N50m. People would always try to rubbish your efforts”.

Although, many people felt that the action against Alaba was rather harsh, Lawani states that it was just a means to an end. Hear him: “In any situation to serve, there will be all kinds of viewpoints. Nobody wants Alaba in the real sense to be closed down, to make anybody suffer. But if there is a thief who always jumps over the fence into a particular compound, one day, the victims of the robbery might decide to burn down that particular house. The landlord of the house would be forced to either bring out the thief to protect the interest of the innocent ones, or parade all the tenants of the house and say: 'There is no thief here'. So it is a means to an end; not the end itself”.

For one who has been in the entertainment industry for close to 30 years, he would be in the best position to answer the brewing question on why new artistes record songs that lack content. “No, no. no”, he cuts in. “There is no basis for comparison. People sing about what they know. Back then, in the '60s and '70s, every musician probably sang about independence, then FESTAC. Whatever an artiste sings about is a function of what is in the society; his / her experience. If today's singers sing about corrupt government and making quick money, it is because that is what they see. Before, it wasn't as if there were no women with big backsides, but it was not pronounced. These days, it is like 10 for one kobo. You see a lady walking on the street dressed in a blouse made from half a yard of material and all her assets are exposed – that is why there seems to be so much sex in the songs nowadays”.

On graduation from the then Bendel State University, Ekpoma in 1986, where he read English language and literary studies, he started writing and criticizing the entertainment industry for a while. Four years later, he obtained a post-graduate diploma (PGD) in Mass Communication from the University of Lagos and then, the Igarra, Edo State born man decided to literally 'get into the heart of the matter'. He went to work for the Performing Musicians' Association of Nigeria (PMAN)! “I volunteered to work for PMAN and discovered that the problem with the music industry wasn't the lack of talent but the mismanagement of the whole system”, he reveals.

As a manager, he has managed such artistes as Felix and Moyzz, Lt. Shotgun, Felix Duke, Alex Zitto, Chris Hanen, Ras Kimono and currently, Black Tribe. He is also the Head Consultant for 'Showbiz Network Services Limited' – a Lagos, Nigeria based total events management and production company that specializes in designing, creating, managing and producing special events with a bias for music-related activations and team management. In addition to Showbiz Network Services, he also oversees a number of affiliated composite companies with interests in equipment rental and audio-visual production. He is a director of Edi Lawani & Associates, Ayeesha Music Limited and Paragonis Multi-Media Productions.

At the dawn of Nollywood, Lawani skeletally was involved in the production management of some movies. He also featured in a few roles in the early Nollywood like Silent Night, Haunted and Onome. Why did he stop acting? “For me, acting was just by chance. Most times, I was part of the production crew and when someone didn't show up, they would say 'Edi, abeg just act this part for us'. After doing the first one, second one, they decide 'you were good the first time so just take the role. Besides, now there are more talented persons in the movie industry so why drag it with them”, he asks.

Even though he doesn't mention it, he is crazy about his family. A large portrait hangs from one side of the wall with his wife and three children. Little wonder that in the nearest future, Edi intends to taking a break from active showbiz and retiring to a life of 'teaching' to spend all his time with them.