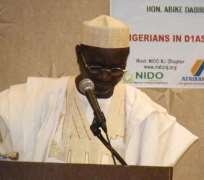 Shekarau stated this on Friday in New Jersey, USA while addressing Nigerians participating

in the world conference of the Nigerian in Diaspora Organization.

'witch hunt' and rubbish political opponents.
''EFCC is a glorified police station, honestly any responsible police officer will tell you this is

our job, there is nothing new.'' He stated.
Shekarua also challenged the federal government to adequately fund the police and allow

them to do their job noting that if enough funds are given to police, they will do a good job.

According to him ''the police is an institution, even if you compromise the IG, how many of

the police officers will you give money? Very few. But in a commission of ten, you can easily

buy them over. We are creating agencies, with all due respect, that have hidden agenda.''

conceived and ill motivated.
''I was once watching Nuhu on the television, and was being asked what was the secret of

his commission, and he said number one secrete of my commission is that I have abundant

funds, I can send any team of investigators to any part of Nigeria, give them money, put

them in nice hotel.
''They have beautiful air-conditioned vehicle, good guest houses where they will lock you

in. Then go to police station, to write a statement you will have to buy a piece of paper. You

deny police funds to work, and you create an agency and give them funds and you are

saying that they are doing better than the police'' Shekarau observed.