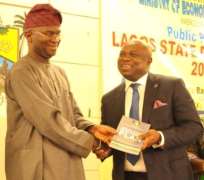 The swearing-in ceremony of the newly-elected Lagos State Governor Akinwumi Ambode was held on 29th May, 2015 at the ginormous ultra-modern open-air event centre called Tafawa Balewa Square located in Lagos Island, Lagos State, Nigeria. Earlier on that day (specifically at 4.10 a.m), heavy rain started in many parts of Lagos State but lasted just for a few minutes which means that by 5 a.m on that glorious day, the rain had completely stopped, giving the event planners arranged to decorate the aforementioned Tafawa Balewa Square enough time to do their work.

By the time the invited VIPs and the general public started arriving at the venue from 9 a.m upwards, the whole Tafawa Balewa Square had been beautifully decorated with several gigantic balloons (with the pictures of the governor-elect Akinwumi Ambode and his deputy governor-elect Dr Mrs Oluranti Adebule), thousands of artificial flowers of different colours, dozens of beautifully painted buckets filled with water, dozens of rugs of different colours placed on the concrete ground of the Square, and a podium completely covered with red carpet (and placed in the middle of the Square). Directly facing the podium at a distance of about 50 meters away (and linked by a strip of red carpet) was a raised platform of almost 100 meters in length, completely covered with red carpet and having several chairs placed on it. Because the platform was where the very important guests were to sit, the chairs were each covered with red satin cloth and the whole platform was covered with tarpaulin tent to shield the VIPs from the elements.

The traditional ruler of Lagos State Oba Rilwan Akiolu was one of the first VIPs to arrive at the event venue followed by a rapid succession of other lesser traditional rulers in Lagos State. At about 10 a.m, the leader of the Lagos State Chapter of the All Progressives Congress party Chief Henry Ajomale and his wife arrived, almost at the same time the deputy governor-elect of Lagos State Dr (Mrs) Oluranti Adebule arrived with her husband. The wife of the Osun State governor Mrs Aregbesola arrived just after the deputy governor-elect Dr (Mrs) Oluranti to represent her husband Governor Rauf Aregbesola (who was at the material time in Abuja FCT for the swearing-in ceremony of President Muhammad Buhari and Vice President Yemi Osinbajo).

At exactly 10.07a.m, the Lagos State governor-elect Mr Akinwumi Ambode arrived in a convoy of 4 vehicles and few minutes later, representatives of the Embassy of the United States of America in Nigeria, the German Embassy in Nigeria and the British High Commission in Nigeria were led to satin-covered seats on the tent-covered platform. Few minutes after this, former governor of Lagos State (from 1979 to 1983) Alhaji Lateef Kayode Jakande and his wife were seated and at exactly 10.26 a.m, the outgoing deputy governor of Lagos State Princess Adejoke Orelope-Adefulire drove into the event venue, different types of popular music all the while being played by the multiple-award-winning D.J Jimmy Jatt (who has been officially declared as the best disc jockey in Africa) and food and drinks in white take-away packs all the while being served to all the spectators at different points in the square.

At exactly 10.33 a.m, the outgoing governor of Lagos State Mr Babatunde Fashola, S.A.N arrived in a 17-vehicle convoy (11 black jeeps, 1 white ambulance, 1 black police van, 1 white coaster bus, and 3 black power motorcycles) and immediately he came out of one of the black jeeps, he proceeded to the podium, climbed the steps to the top and stood at attention for 2 minutes, the whole thousands of non-VIP spectators on the concrete rows of seat in the Square screaming his name in joy and the press corps feverishly taking his pictures and videoing him. He then left the podium and walked to the VIP Section to seat with other VIPs at the event.

The national anthem was sung at 10.40 a.m and immediately after this, Governor Fashola stood up to give a short speech. For the better part of 20 minutes, he (Fashola) briefly enumerated the achievements of his administration in the 8-year period (2007 to 2015) that he governed Lagos State. When he finished his speech, the Chief Judge of Lagos State, Justice (Mrs) Olufunmilayo Olapade Atilade climbed the podium in readiness for administering both the oath of allegiance and the oath of office on the deputy governor-elect and the governor-elect respectively according to the provisions of Section 185, Subsection 2 of the 1999 Constitution Of The Federal Republic Of Nigeria which states that “… the oath of allegiance and the oath of office [of a governor or deputy of a state governor] shall be administered by the Chief Judge of the state …”

Few minutes later (specifically at 11.48 a.m), Lagos State Governor Akinwumi Ambode left the podium and went to a ceremonial military jeep that had no roof. In his white agbada and wine-coloured cap, he stood in the jeep and waved continuously at the spectators at the event venue while the jeep was been slowly driven around the Square by a policeman (there were 7 policemen and 7 operatives of the Department of State Security, DSS in or surrounding the jeep with the governor in addition to the driver). After this, Governor Ambode returned to the VIP platform with his wife (who wore a wine-coloured lace gown) and immediately commenced the reading of his maiden speech as a governor. He stated in the speech that he will create a new state ministry to be named Ministry Of Wealth Creation And Employment (to be funded by the 25 billion naira trust fund he would create), establish the Office Of Civic Engagement, and found the Office On Overseas Affairs. He also pledged to make his administration all-inclusive and compassionate, and ended the short speech with the double-meaning statement that “… the best practice of yesterday might be the worst practice of today …” before adding another double-meaning statement with a definite tone of finality that he was “… not coming to re-invent the wheel…” The national anthem was immediately sung after the end of the speech (at 12.17 p.m) to mark the end of the 2015 Lagos State Governorship Swearing-In Ceremony.

The 17-vehicle convoy that earlier brought Mr Babatunde Fashola, S.A.N to the event venue drove up to the VIP platform and Governor Akinwummi Ambode and his wife boarded the cars because after the swearing-in ceremony, Mr Fashola had effectively become an ex-governor so the 17-vehicle motorcade he brought to the Tafawa Balewa Square had by now been transferred to the newly-investitured governor. The same thing was applicable to the ex-deputy governor Princess Adejoke Orelope-Adefulire and the newly-investitured deputy governor Dr (Mrs) Oluranti Adebule because Deputy Governor Adebule left the event venue in the cars that brought Mrs Orelope-Adefulire while the latter likewise left the venue in the vehicles that brought the former. After these departures (Governor Ambode exited the event venue first, followed respectively by Deputy Governor Adebule, Ex-Governor Fashola and Ex-Deputy Governor Orelope-Adefulire), all the other VIPs (the Oba of Lagos, the Lagos white cap chiefs, representatives of the embassies and high commissions, ex-governors of Lagos State, All Progressive Congress party cheiftains, etc) also started leaving the venue in their various exotic vehicles almost simultaneously with the thousands of non-VIP spectators (including the hundreds of secondary school students in their school uniforms) that came to the event.

It was around this time that some of the non-VIP spectators (in their scores) started showing their primeval and unreasonably greedy nature by illegally appropriating for themselves almost every item of decoration at the event venue. These persons of low moral character started with the large decorative balloons with Ambode - Adebule pictures by deflating and folding them with the intention of taking them home as their personal property; they next emptied the dozens of beautifully-painted buckets of water and shared them among themselves before openly stealing the thousands of artificial flowers on the grounds of the Square. Still not satisfied, these scores of looters started folding and taking home the dozens of rugs of different colours used to prettify the grounds of the event venue (including the red carpet linking the podium with the VIP platform). Their inordinate avarice was slaked only when they climbed the now-empty VIP platform and started removing all the satin cloth used to decoratively cover the chairs (the scores of policemen present simply looked on and made no attempt to stop the daylight looters), all with the intention of illegally appropriating them.

Apart from this horrendous, sordid daylight looting by a section of the non-VIP spectators, the 2015 Lagos State Governorship Swearing-In Ceremony was largely a success story. The security was adequate (when the Ex-Deputy Governor Orelope-Adefulire went to use the services of a mobile toilet within the premises of the event venue from 11.00 a.m to 11.18 a.m, she was accompanied by 2 policemen and 2 operatives of the DSS), the free food and free plastic-bottled soft drinks provided for the occasion by the Lagos State Government was surplus (some non-VIP spectators collected the food pack and the accompanying soft drink up to 8 times), the decoration was excellent, the music entertainment was high quality (which should be expected because the D.J Jimmy Jatt used for the occasion is the best in Africa), and there was no incidence of violence