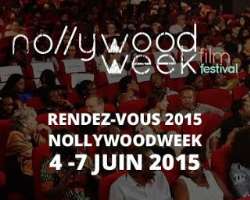 The Nigerian film festival, NollywoodWeek Paris, has announced the 3rd edition of it's annual festival. Haitian actor, Jimmy Jean-Louis, will serve as the festival ambassador for 2015.

The festival kicks off Thursday June 4th and ends on June 7th. “Jimmy is a perfect representation of the open spirit that the festival advocates,” said the festival’s Executive Director, Serge Noukoué.

“After making his mark in the United States playing various roles in Hollywood, he headed to Nigeria where he acted in several movies with this will to contribute to the development this new industry and today, he sports his director’s cap with his documentary, Jimmy Goes to Nollywood, which will be presented on opening night on Thursday June 4th, after Jon Ogah’s opening concert.

This year, ten films will be screened for the Parisian audience to discover and eight of those films are in competition to win the Audience Award.

The official selection is made up of the following feature length films:

A Mile FROM HOME directed by Eric Ameghien – Chronicles the life of a university student who joined a gang in his quest to avenge an injustice done to him by a notorious gangster. He is far from imagining just where this decision will lead him.

The Last Three Digits directed by Moses Igwang – By chance, Alex runs into the love of his life at a shopping center and uses the opportunity to get her number before she slips away again but three missing digits lead him on a true quest to find love.

Dazzling Mirage directed by Tunde Kelani – Based on the novel of the same name, a young woman with sickle cell anemia must overcome various obstacles to lead a normal and fulfilled life.

Gone Too Far directed by Destiny Ekaragha – A comedy that unfolds in one day when two brothers, one London bred and the other from Lagos, meet for the first time after being separated since infancy.

Ojuju directed by C.J. Obasi – Romero and his friends have to fight their way out of their neighborhood when the water supply infects people with rabid river blindness. Zombie thriller Nigerian style.

October 1 directed by Kunle Afolayan – In 1960, a Nigerian police detective is dispatched to investigate the murders of women in a small community.

Thy will be Done directed by Obi Emelonye – The Pastor of a large church in Lagos has a normal life until one day his wife, who died 7 years ago, returns.

The directors of all the films will be present to discuss their films as well as several Nigerian star actors such as OC Ukeje, Ramsey Nouah and Lala Akindoju.

The festival will take place at Cinéma l’Arlequin in Paris 6th quarter (76 rue de Rennes, 75006, Paris, France). The organizers are expecting over 5,000 festivalgoers this year to take part of this unique event dedicated to this phenomenal industry. To attend, individual tickets can be purchased for 8 euros or Festival Passes can be obtained now on nollywoodweek2015.eventbrite.com

NollywoodWeek Paris is an annual festival that aims to make Nigerian films more accessible worldwide. The festival is organized by the association Okada Media. More information can be found on www.nollywoodweek.com