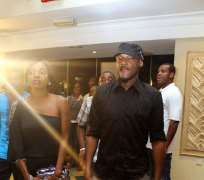 On the heels of the one year anniversary of his administration and the need to reflect greater diversity and build a broad-based cabinet in furtherance of the policy of inclusive governance and quality representation across the state, the governor of Anambra State Chief Willie Obiano, today strengthened his cabinet with the appointment of five new Commissioners.

Speaking shortly after the news commissioners took the Oath of Allegiance and the Oath of the Office of Commissioner, Governor Obiano told the new appointees that they came highly recommended for the jobs because of the value they would add to the administration. According to him, “serving in this administration is an honour to you and I expect you to live up to the challenge as members of my cabinet. As you already know, we are moving well and we have brought you on board to help move Anambra State forward.”

Speaking further, Obiano charged the five new members of his team comprising of three men and two women to justify the confidence he reposed in them in their areas of appointment. “You can see that among the forms you have with you is your Job Specifications. You are expected to perform based on set parameters and there is also provision for periodic reviews.”

Speaking on behalf of the new appointees, the new Commissioner for Information, Culture and Tourism, Mrs. Mary Imelda Obinuju Nwogu thanked governor Obiano for the opportunity given them to serve the state. Said she: “We are highly elated and very happy to be found worthy by this administration. We are ready to work to move Anambra State forward especially in the area of the 4-Pillars of Development where you have shown tremendous capacity and achievements as well as on the Enablers.”

The new commissioners are expected to imbue the cabinet with zeal and commitment as the high performing governor seeks to surpass his widely acclaimed first year performance.