We have not dropped case against al-Mustapha, Says Lagos State 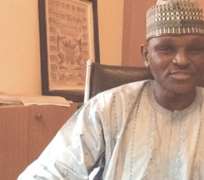 The hangman's noose is not yet totally off the neck of former Head of State, Gen. Sani Abacha's Chief Security Officer, Major Hamza al-Mustapha.

The Lagos State Government said it had not dropped the murder case against him.

Likewise, the state government explained why it retained the death sentence clause in the state's criminal law, noting that it was the decision of the residents of the state that made its retention compelling and imperative.

The state Attorney-General and Commissioner for Justice, Mr. Adeola Ipaye, disclosed this at a news conference he addressed alongside the Solicitor-General of the state, Mr. Lawal Pedro and the Director of the Office of the Public Defender (OPD), Mrs. Rotimi Omotola among others.

A Court of Appeal sitting in Lagos had quashed the death sentence in favour of Mustapha and Alhaji Lateef Shofolahan, both of whom were convicted by Justice Mojisola Dada of Lagos High Court for their complicity in the assassination of late Alhaja Kudirat Abiola.

However, at the conference, the attorney-general disclosed that the state government had already filed an appeal at the Supreme Court in Abuja, though the appeal had not come up since it was filed at the apex court just.

He explained that it was for this reason that any update about the case 'has not been made public. It is still pending in the Supreme Court. As soon as it is called up, the residents of Lagos will be aware of what happens from there on.'

On the death sentence, Ipaye explained its retention in the state's Criminal Law, noting that the state government actually conducted a survey across the state to determine whether the people of the state 'still wanted it or not.'

He said the state government engaged an agency skilled in questionnaire administration 'to conduct the survey. We resorted to this because there has been a movement internationally seeking the abolition of death penalty.

'A lot of international agencies concerned come first to us believing that whatever Lagos does is what other states will do and what the federal government will eventually do. There is a lot of pressure on Lagos State.

'But we thought it was not really our decision to make on behalf of all residents just like that. We thought it was important to hear from all residents. That was why we commissioned the study. But the report of the survey showed that over 60 percent still wanted the retention of death penalty for offences like armed robbery and murder.'

Also speaking, Omotola disclosed that in 2014 along, about 15 rape cases were determined in the state, in which she said the offenders were awarded penalty, ranging from life imprisonment and seven-year imprisonment.

She added that the state government 'has about five cases of persons that were imprisoned for eight years. What we will be doing next is to file for damages based on under the fundamental human rights. What is delaying us at the moment is that we are yet to get the certified copy of the judgment.

'The total number of domestic violence and sexual abuse and other cases treated by the agency in the last four years were 12, 120 recorded. In 2014 alone, we had 526 cases out of which 227 are still in court,' the director said. Thisday