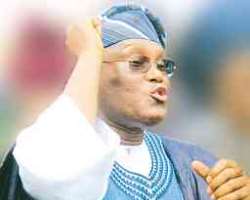 Anytime from now, a former vice-president, Atiku Abubakar, will formally declare for the Peoples Democratic Party.

This is because his political associates at a meeting with him in Abuja on Wednesday endorsed his return to the party he left in 2007.

The associates, which included Alhaji Lawal Kaita; Senator Ben Obi; Chief Dapo Sarumi; Otunba Oyewole Fasawe; Chief Dubem Onyia; and Chief Titi Ajanaku; decided to set up a committee that would facilitate the return of the former vice-president and his associates to the party at the centre and the states.

The decision of the group was said to have been sequel to the receipt of reports by political leaders across the six geopolitical zones after interacting with their supporters in various political parties.

The final round of meeting followed an earlier one last week to consider the steps to be taken as a result of the failure of various political groups associated with the opposition mega party to come to terms for its emergence.

At last week's meeting, the group reviewed the frustrations it encountered in the formation of a grand opposition political party.

The various pillars of the movement have gone their separate ways and the 'Political Associates of Atiku' said they were left with no option than to take their destiny in their hands.

At the meeting, which started on Tuesday night and dragged into the early hours of Wednesday, all the states representatives that completed their consultations were said to have reported an overwhelming support for their return to the PDP.

The meeting resolved to continue its support for an associate of the former vice-president and Action Congress candidate, in the last Anambra State governorship election, Dr. Chris Ngige, who has a pending matter at the election tribunal.

In his remarks after the resolution, Atiku advised members of the group on the need to carry themselves with modesty and humility; and to desist from attacking other groups involved in the failed mega party.

Also, he said the differences that led to the failure of the mega party initiative were normal in a democracy, where individuals and groups were bound to occasionally differ.

It was, however, not clear why Chief Tom Ikimi was absent from the meeting. However, our correspondent gathered that the former Minister of External Affairs had at the last meeting of the group wondered what had changed in the PDP to warrant the group returning to it.

He was said to have said that since all of them had abused the party, it would be difficult for them to start praising it now as the party that could save the country.

Ikimi had issued a statement that he would not return to the PDP.

Our correspondent had learnt last week that many stalwarts who had followed Atiku out of the PDP in 2007 had signified their refusal to return to the party.