An Exclusive Interview With Nyako 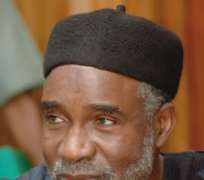 An exclusive interview with the First Son of former Governor of Adamawa state (Real Admiral Murtala Hamman Yero Nyako), who recently won the central senatorial seat of the state under the plat form of All Progressives Congress (APC).

Rtd Commodore Abdul'Aziz Murtala Nyako responded to wide range of issues with our correspondent, Tom Garba in Yola,where he talked about his plans for Adamawa people as about performing his legislatives duties, why he was arrested by EFCC,his role in joining his traditional title-Youth Leader of the Adamamwa Emirate council and a law maker to bring development and growth to the state and the country at large. (Sarkin Matasan Lamidon Adamawa).Nyako exposed why his father was impeached, in a short while he will expose those that turned Adamawa state into a political war zone.

Q: Sir you will certainly going to be one of the youngest senators from Adamawa state, how do you feel?

A: Well, i feel honour and respected accorded to me by the good people of Adamawa state who they found me capable and worthy for this noble course. I cannot thank them enough promise them a good representation that will shape my constituency and the country at large.

Q: If you will be given a choice in the red chambers to select your committee of choice, which one will you prefer?

A: All my life i have been a military man under the Nigeria Navy, shoulder many responsibility at one point in time or the other. Haven gone through military discipline in my life, right from nursery to up to Nigerian defence academy (NDA), i also received an international military training with the British Naval training in Britain and USA. When i discovered things are going arbitrary during my father government i retired as a commodore from the Navy and his Royal Highnest the Lamido Adamawa gave me a traditional title of Sarkin Matasa (Youth leader) of his Emirate where i begin educating and enlighten youths in the Emirate on the negative effects of all the social vices most especially the serious dangers embedded in drugs abuse, i reawaken them from their giants sleeping to, know that they are the present leaders we need.

My brother you can see that i am a full blown military Man and full blown civilian Man. To answer your question properly i want to tell you that i love to see me in a committee that has to do with security in the national assembly where i can fit in good to pass laws and bills that can tackle the issue of insecurity that has been a big challenge to our government, insurgency had badly affected my immediate constituency. I will work hand in hand with my serving friends in the Navy who presently are wearing the ranks of Brigadier to cut off all the problem of insurgencies in Nigerian especially north east.

Q: You dedicated the success of the past election to your father attributing it a winning for a Adamawa people does it mean you are placing your father first before the people of Adamawa central?

A: Many people will tend to get wrong, i am trying to appreciate my father for being the best father in the whole world, which i know if my father today will still be a labourer or a wood breaker he will still be a good father. In general Mr Tom I mean my father had done so much to me, since when i was young he make sure he allows you to do what you are doing to the best of your knowledge remember when i passed out from Nigerian defence Academy needed him to around to decorate my rank he refused and my son you did alone, i was not there, you got all the praises from me, i thank God i was not knelling down to beg you do that. From that day i realised my father is somebody that does not interferes with your choice of life or with whatever you are doing all he does say is that be the best you can be in whatever thing you are doing.

In all my saying I am trying to let you understand that my father is out of the game in this my new assignment, thank God the people of Adamawa central voted me without him been around that some would even say he influence my votes, without him the people spoke so i owe them all it takes to bring change in the state.

Q: Despite your discipline as a military Man you still look soft and gentle,would you be called a vegetable military man?

A: Laughing.........Hmmm if there is something more vegetable i think i deserve it considering the portfolio i am handling now, meeting people and listening to their complains on daily basis, some will hurt you and some will encourage you, and you still have to go along with them, so having a virtue of vegetable as a politician is an added advantage to help you meddling up people's needs. Everybody needs those qualities to succeed in whatever thing one's is doing.

Now that i have the traditional structure as sarkin matasa and the new office as a senator, you i have to marry the two in a more organise way to help my people

Q: How did you see your last contest with a female opponent?

A :I thank God for A'ishatu Binani she gave me a good fight ,in fact i respect her for the good policies, pet projects and she is maintaining a good working relationship with her electorates ,Binani is a big name in our senatorial zone. I came to discovered that she is more of a sister to me only that along the line we pitched our tents in different political plat forms .with the kind of courage she has in our scene of politics the sky is going to be her limit.

Q: What exactly led to your arrest in Gombe by EFCC?

A: Don't worry, i am preparing time for that have a set time that i am going to expose my father enemies, my enemies and those behind my father's impeachment

Q:Do you have plans of arresting your political enemies?

A: No! I cannot do that,i left all things to God to vindicate me